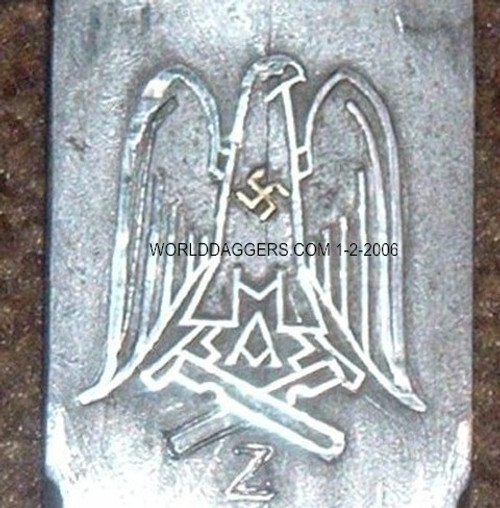 First some facts: I was contacted by the son of the original veteran who owned this item, prior to it's posting on any forum or and dealer had a shot at this. Once it was displayed on a certain forum, the forum manager convince the owner to take it offline I have been told this person received 10 % finders fee. I can't confirm that since i don't deal with people with moral issues. Pictures and text provided by the present owner:

Notice: The original owner and soldier who brought this back has given me permission to post this and his information:

My dad was A soldier in WWII and He has a German knife he found in a house when he was going through Germany it is a German officers dress knife he was told but I have been searching the net trying to find some info on it and I can't find anything the blade is about 7 7/8 " long and one side it says AMANN in the grove and an eagle with a swastika on its chest and it looks like two barrels or something like that crossed in its claws and a Z under that. On the other side there is a swastika then Pg AMANN IN KAMERADSCHAFTLICHER VERBUNDENHEIT then there is some cursive writing hard to read it appears to be a fancy E than maybe w u a u its hard to say and the grip is white with silver knobs all over and gold piping on the silver and on the top another swastika it has a medal scabbard or but it looks like it may have been covered with leather.

Here is a short biography of AMANN I found in the internet: on 1-3-2006 Max Amann was born in Munich, on February 9, 1902. He served in the German Army during World War I and was wounded, losing his arm as a result. While in the army, Amann met Hitler and later joined the National Socialist German Workers' ("Nazi") Party. An educated and skilled businessman, Amann became the Party's business manager and the publisher of its propaganda materials, including its newspaper. Amann took part in the attempted Beer Hall Putsch, or coup d'etat against the Bavarian government, in 1923. Like Hitler and other coup conspirators, Amann was convicted of treason and sent to Landsberg Prison. After he was released, Amann published Mein Kampf ("My Struggle"), the book Hitler had written while in prison, which outlined Hitler's policies and vision for a new Germany. In 1933, Amann became a member of the Reichstag. He used his influence to gain control over other publications in Germany, closing down any that opposed Hitler or the Nazi Party.

Amann successfully used his political capital for his own financial gain. Head of the world's largest newspaper and publishing company, Amann income increased from 108,000 to 3,800,000 marks between 1934 and 1944. However, though he survived World War II, he was arrested by the Allies in 1945 and brought before the military tribunal at Nuremberg. Amann was convicted of war crimes and forced to relinquish all of his assets, but was only sentenced to ten years in prison. He died penniless in March 1957.